The use of cord blood is a miracle of recycling – giving life today and saving lives tomorrow. When transplanted into a patient, different types of blood cells can be produced after the patient's own blood cells have been depleted or destroyed by chemotherapy or irradiation.

Transplantation of this blood produces far less immunological complications than transplant of adult bone marrow. This means that the matching between donors and recipients is less critical, which makes it easier to find suitable cord blood donors. 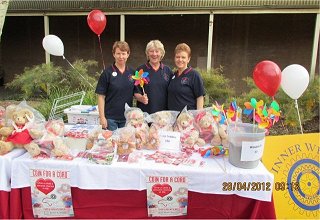 Each year our club holds a stall in Saint Barbara Square and sell items to raise money for Cord Blood Research. This is the Inner Wheel of Australia's National Fund.

Our International fund is the Hamlin Fistula Hospital of Abbis Ababa in Ethiopia. This is run by an Australian, Dr. Catherine Hamlin. She and her husband Reg who was from NZ went there over 50 years ago and sadly Reg has passed away, but Catherine still operates and she is well into her 80's. Our club holds an International night each year with fun and games while raising money for our International fund. We also have money boxes in which we put our spare coins and this also goes to the international cause.

A Little about Dr. Catherine Hamlin.

Dr Catherine Hamlin, who is literally an Australian living treasure, named as one of 100 such treasures by the National Trust.

Together, they founded a hospital in Ethiopia to treat injuries caused during childbirth. Now in her 80s, Dr Hamlin continues her work in Ethiopia with some assistance from AusAID.

We were very touched by their plight. The sorrow and the sadness that these little girls were suffering from. We were replacing a gynaecologist that had been there, and she said, "These girls will come to you and they'll break your hearts because there is very little you can do for them." She didn't actually say how many there were. We didn't know. We got one or two to begin with in the first few weeks or the first few months. And then of course as we cured them, more and more came.

In 1959 Dr. Catherine Hamlin arrived with her husband and 6 year old son Richard in Ethiopia. As gynaecologists and obstetricians, they saw a move to Africa as a chance to make a difference.

We thought we were going to found a midwifery school, and we were able to do this for the first few years and then the Government said, "This is too expensive for us to fund and we'll have to close it." We were working in the government hospital. And by that time, we had begun to get the fistula patients coming down from the countryside. And of course we hadn't seen an obstetric fistula before, and they really did break our hearts. Their need was so great. We just couldn't walk away.

To give a young woman a new life who's been perhaps suffering for months or even years of rejection from her society, a husband leaving her, family rejecting her, not from cruelty, but because they couldn't cope with a woman leaking urine in a small house – in a country houses are poor, perhaps only one or two rooms. And so there was nowhere for her to live with the family because of her offensive nature of her injury. So she's put somewhere alone in the village, perhaps in a shed somewhere, or just a lean–to made of sticks even. And she will languish there till death.

It was the Hamlin's early work in Australia that prepared them for the medical challenges they would face in Ethiopia. Catherine Hamlin's first job was at Crown Street Women's Hospital in Sydney. It was there she met her future husband, Dr Reginald Hamlin. Together, they shared a passion for helping women.

My husband was an enormously compassionate person and he was so touched by the plight of these girls. I was too. But he was the driving force that – he was the one that really set up the hospital we founded in the end.

They responded to an advertisement in the Lancet medical journal calling for gynaecologists to work in Africa. They didn't know it when they first arrived, but they would specialise in obstetric fistulas – injuries sustained by women during childbirth.

A fistula is an opening between an internal organ and the outside of a body. The fistula we're treating is between the bladder and the birth passage or the vagina and 20 per cent of our patients have a hole in the rectum as well, between the rectum and the vagina.

Nobody realises that these women in Ethiopia, think it's from some practice that goes on to give them the fistula, but it's not. It's due to a small pelvis or a malposition of the baby inside the uterus. Fistulas are common in developing countries because women often have no access to help during childbirth. From early on, the Hamlins made it their mission to help as many women in Ethiopia as they could. And there have been thousand who've been cured.

Update on Catherine Hamlin.
2016
Now, Sydney-siders travelling on her namesake ferry can continue to be inspired by Catherine, who has dedicated her life to ensuring the health and dignity of Ethiopian mothers who suffer from preventable and treatable childbirth injuries.

Upon hearing the announcement from NSW Minister of Transport and Infrastructure Andrew Constance, Dr Catherine Hamlin AC said, "I am so grateful. It really is lovely to know that so many people have tremendous love for our work and for our patients. I hope that this will help draw the attention of the world to this great need in Ethiopia for maternal healthcare. I want to help these women. I know you would all be touched if you could see them in their plight. Thank you for your support."

Carolyn Hardy, CEO, Hamlin Fistula Ethiopia Australia said, Catherine has dedicated almost 60 years of her life to Ethiopian women, working tirelessly to eradicate the most horrific type of childbirth injury, obstetric fistula. She has transformed the lives of more than 50,000 Ethiopian women and most importantly has restored their dignity. 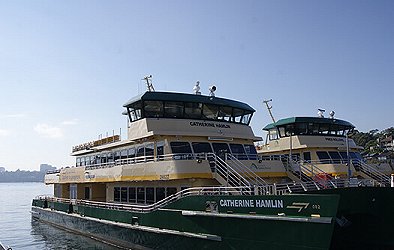 Catherine was a Sydney girl. “The Catherine Hamlin” ferry on Sydney Harbour is a wonderful way to celebrate this inspirational woman. Catherine will turn 93 in January and continues to live on the grounds of the Addis Ababa Fistula Hospital. Sydney siders will begin riding on the ferry in 2017.

Dr Catherine Hamlin had an extraordinary year in 2017. She was named 2018 NSW Senior Australian of the Year. She now progresses to the National Australia Day awards, to be announced on 25 January (the day after her 94th birthday). Earlier last year, a Sydney Harbour Ferry was named in her honour. Catherine was also awarded Ethiopia's prestigious 'Good Person of the Year' award for 2017. She continues to receive accolades such as these in her usual humble, gentle way.

2017
In June this year, Dr Catherine Hamlin’s niece and great-niece, both also named Catherine, had a very special visit on the 'Catherine Hamlin' ferry. Given Dr Hamlin lives on the grounds of the fistula hospital in Addis Ababa, it was wonderful to have her family and namesakes represent her at the ferry viewing in Sydney.